If you’re an expat who lives in Ha Noi for a long time or just a traveler who went to Ha Noi for its...

If you’re an expat who lives in Ha Noi for a long time or just a traveler who went to Ha Noi for its signature dish “pho”, been eating it a lot of times then you decide to move to Saigon and try Pho here, you will be either yelling “Wtf*” or “Wow”.

Have you ever tried a Pho in Saigon?

There are tons of debates about the difference between Pho in Hanoi and Pho in Saigon, and a lot of votes of course. The bottom line is, it’s really stupid to say if which Pho is better because it’s the signature point of each place. If you’re a Hanoi Pho lover and will always think Pho in Hanoi is the best in the world, you better leave this article right now. If you’re just a traveler who wants to happily discover more about Vietnamese food, you would like to stay to know more about the variant of Vietnamese traditional food – Pho. It’s also a interesting way to understand about the culture, we will explain more below. Now let’s start

The soul of Pho is the broth, and this soul is way different from the South and the North, because of the ingredients and how people make it. In Saigon’s Pho broth, the sweetness mainly comes from the sugar when seasoning, somewhere, people also make the broth by chicken’s bone and dried squid, therefore, the Pho broth in Saigon looks a bit unclear, but taste much fattier and richer. 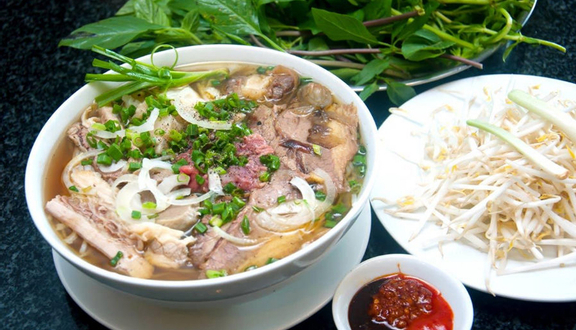 In Hanoi, people keep their ancestors tradition cooking Pho broth from the bone only, sometime they add MSG but not so much. The cook will spend the whole time to take out the foam in the broth to make look crystal clear but still taste delicious. This also state the cultural difference between Hanoi – a place with slow pace and tradition-oriented and Saigon – an open vibrating city which always want to create daily new value.

The broth of Hanoi Pho look crystal clear, but the taste is still fantastic

Noodles is also a big difference, in Saigon, the noodles is big and thick, which can make sure that the Pho bowl can please any starving stomach. The cook often offer a generous treat with a lot of noodles inside one bowl.

The Noodles of Saigon Pho is big and thick

Meanwhile in Hanoi, the noodles is treated in an “art” way, which is mainly hand-made, carefully poached through the hot water so it can bring a very nice experience in term of the texture when you enjoy the bowl of Pho. In my own opinion, I like the Pho from Hanoi because the noodle is served in a way which is more sophisticated. 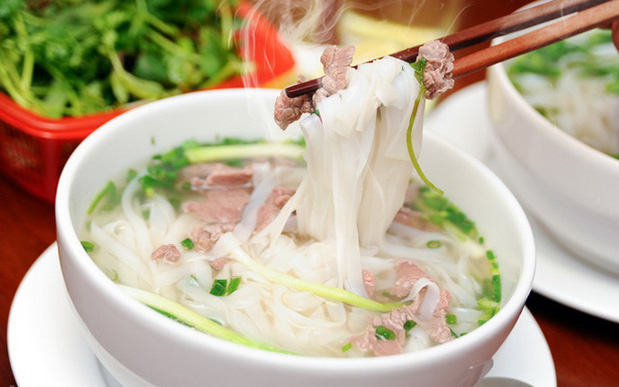 The Noodles of Pho Hanoi is thinner and gentle

This also shows another cultural difference between the South and the North. In Hanoi, Pho is like an art that past through generations, so it should be appreciated and be made in the best way that can be, in contrast, the bowl of Pho in Saigon is more about the generousness of people here “eat at much as you can”.

Because it’s a tradition, Pho in Hanoi has not many topping options, mainly the poached beef, chicken and green onion, which is totally difference from Saigon, where you can have a lot more options of topping to go with your Pho: beside of poached raw beef, there are also beef meatball, flank steak (nạm), brisket point (gầu), tendon (gân), chicken, somewhere they can even add sea food or fishes (yeah I know it’s weird, welcome to the most emerging city of the country), and more, you can have a big bunch of veggies and herbs to go with your Pho. And one more significant thing that can show you if you’re eating Saigon Pho or Hanoi Pho: The side sauces. While you can only squeeze the lemon then enjoy you Pho in Hanoi, it takes you much more steps eating a Saigon’s bowl of Pho: you have chilly sauce, soybean sauce, fish sauces and especially special black sauce made for Pho only (i bet you can find this sauce in Hanoi).

Saigon welcome millions of new people from everywhere in Vietnam (and the world) each year coming here to work and live, to serve the huge number of different tastes, its Pho need to adapt and take evolution daily, so it’s not strange that you can find a lot of Pho style in this city. And the people in this city are very generous to add in new things in dishes, because they know that they are also the “new thing” that added to this city, so in one bowl of Pho, you can see the “melting pot” factor very clearly in Saigon.

In Hanoi, the pace of life is slow and people tend to preserve the tradition, so you can have a bowl of Pho with exactly the same taste from thousand years ago, from the way they make the noodles, cook the broth, the seasoning and plating, only the bests can be kept and passed to other generation.

So what’s your pick? The seamless tradition or a joyful adventure of taste?

If you’re staying in Beso House, there’s some good address around for you to try a bowl of Saigon Pho:

Want to know Pho in another District? Comment below then we will look for some suggestions for you!

If you’re new to Saigon and want to look for a local place to stay with, please feel free to check our listings below from Beso House, where you can stay with us as a family member and enjoy the local lifestyle at very friendly price ☺, hope to meet you soon!